Rufus is the newest addition to our family. Great dog. We rescued him via Petfinder.com and we ended up very lucky with him. He was initially very skittish, but has since really gotten better about being social and very well behaved. He still has his "puppy" issues, but by and large, we couldn't be happier with him.

He's about 8 months old at this point (we got him when he was about 6), and I think he's about as big as he's going to get. I really wanted a Rhodesian Ridgeback, due to their ability to run for great distances. As a runner (well, I hope to be again), I wanted a dog that I could take with me and for my early birthday present, Tanya bought me exactly that!

He's a little small for his breed, and we knew he was mixed, but we're not sure with what.

In any case, here are a few pics and a couple funny videos of Rufus!

Rufus playing in our first big snow and coincidentally the second largest snowfall ever in December! He loved it!

And this is Rufus playing with Tanya's cat, Mew. Renegade sort of gets wimpy around Rufus and when Rufus tries to play with him, Renegade just sort of lays there and whines. Granted, Renegade is about 30 years older than Rufus (comparatively), but still. Anyway, as you can see, Mew doesn't take any sh*t!!

As you can no doubt see from the date, I haven't exactly been current in my postings!

In short: no racing last year due to a lingering hamstring injury; I've moved to Hockessin, DE; I am engaged (and soon to be married) to a wonderful woman, Tanya, from my previous posts; and now I'm enjoying being a homeowner!

What follows is a sometimes-updated view of the things we are working on to make an already great house wonderful.

I'll also throw in a few anecdotes from time to time on some of the other things we're doing!!!

On Saturday, Tanya and I attended the Philadelphia Orchestra's Annual Christmas Concert.

I wish I had some pictures, but they do not allow cameras inside the Kimmel Center.

She has gone every year for quite some time. I have been to events similar to this, but nothing as prestigious as the Philly Orchestra. They're generally 5th on the list of American Orchestras, but they also have a lot of their own claims to fame. Check out their history: http://www.philorch.org/about.html

The concert itself was very impressive. Tanya got us incredible seats, and we had a great view of the stage. The conductor was the typical, animated guy that really put his heart into the whole performance. At the end, he wished us a Merry Christmas, and the chorus actually sang, "We Wish You a Merry Christmas." We found this to be very refreshing. Refreshing, as opposed to the ridiculous, politically correct "Happy Holidays" for fear of offending anyone. Side note: anyone who is offended by "Merry Christmas" can head straight to Pakistan and join up with the Taliban. Weirdos.

Anyway, the orchestra was absolutely incredible and we had a lot of fun. The two hours went by so fast, I was surprised when it was over!

This was the program:


There was also some interesting facts about a lot of these songs in the program. For instance, did you know that O Little Town of Bethlehem was written by a rector at the Holy Trinity Church in Philadelphia? Here are some more tidbits: http://www.philorch.org/pdfs/prognotes/0809_web21.pdf 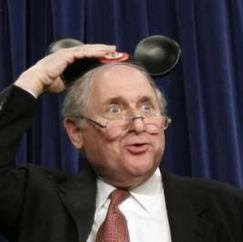 ...are trying to save the Big 3 by giving (yes, giving - call it what you want, but if this succeeds, they'll just be handed billions) them a huge sum of money. The biggest proponents of this are, no surprise, the senators and congressmen from Michigan. Do a quick Google search to see how much the UAW and auto industry have paid Senator Levin, for example, via lobbying. It will make you sick to your stomach.
So, politicians like him, and Pelosi, and Reid; are all in favor of bailing out the auto industry.
I hope that they fail, the Big 3, and with any luck - this will be the beginning of the end for a unionized labor force across America. Unions breed inefficiency, laziness, and an attitude of, "...you can't touch me, I'm Union..."
I know. I live and work with them everyday.
But, back to the politicians. I think this is an appropriate time for a little more Carlin.
His thoughts on politicians... Kind of scary when you really think about this...
[Warning: some harsh language follows...]
"Now, there's one thing you might have noticed I don't complain about: politicians. Everybody complains about politicians. Everybody says they suck. Well, where do people think these politicians come from? They don't fall out of the sky. They don't pass through a membrane from another reality. They come from American parents and American families, American homes, American schools, American churches, American businesses and American universities, and they are elected by American citizens. This is the best we can do folks. This is what we have to offer. It's what our system produces: Garbage in, garbage out. If you have selfish, ignorant citizens, you're going to get selfish, ignorant leaders. Term limits ain't going to do any good; you're just going to end up with a brand new bunch of selfish, ignorant Americans. So, maybe, maybe, maybe, it's not the politicians who suck. Maybe something else sucks around here... like, the public. Yeah, the public sucks. There's a nice campaign slogan for somebody: 'The Public Sucks. Fuck Hope.'"
Posted by Armour Craig at 12/04/2008 11:00:00 AM No comments:

There is something liberating about smoking an Ashton and having a dram of Bruichladdich.

It also make this stupid blogger formatting wizard somewhat less frustrating. Such are the benefits of good cigars and great whisky.

Tanya invited me to her relatives' house for Thanksgiving this year. She warned me that they are crazy people and I should be prepared to be surprised and possibly shocked at dinner. Luckily, I've experienced 32 years of Craig (and our associated extensions) family dinners, so I'm pretty sure that nothing would surprise me.

Tanya's family IS crazy! But, they're incredible as well. Very genuine and very funny. I had an absolute blast at dinner.

We showed up and the wine had already been flowing. Quite a bit of it! The best part was that is was homemade. The origins are somewhat shady, but after talking to Jim...I found out that it was made somewhere in South Philly. Not exactly wine country or the Napa Valley, but it was good. Granted, it was twice as strong as regular wine, but tasted great. There was also some homemade lemoncello that Tanya's Uncle's (Anthony) Mother made. Linda was her name. Not only did she make the lemoncello, but she made cookies, cranberries and cranberry mold (both from fresh cranberries by the way!) that were to die for. Tanya has already professed that she would like to be that woman someday. Hey, I would like to be that woman someday. If I could prepare food like this...I'd consider it!

The entire dinner was absolutely amazing. I tried a small amount of everything. I took what I would normally consider about half a portion of each dish and I still had literally mound of food on my plate. By the end of the dinner, I wished I had worn sweat pants instead of slacks. I needed the extra room!

I was the DD, so I could only sample the aforementioned drinks, but Tanya had no such inhibitions. Let's just say she'll fit right in with the Craig's at any family function;)

We actually forgot that we brought the camera until well into the meal. We managed one quick shot of the table, put the camera down, and it didn't surface again for several hours. Tanya decided to take a lot of candid shots of her family, which came out great. Unfortunately, we didn't get any shots of the two of us, but we'll solve that at the next family outing.

This was a great Thanksgiving! Her family is awesome. Can't wait to introduce her to ours!


Here are the pics:

Tanya's cousin, Phil, helping prepare the table. On the right is the aftermath of the first round of eating. We are all trying to mentally prepare for dessert. 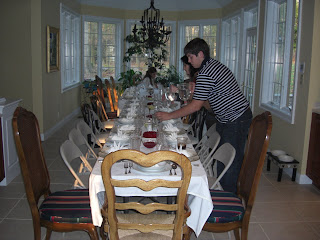 The Matriarch. This is her Uncle Anthony's mother, Linda (on the right). 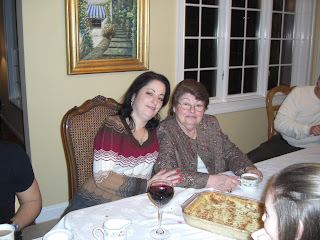 The two primary cooks. On the left is Tanya's Aunt Gabriella. Her Aunt Lee is on the right. 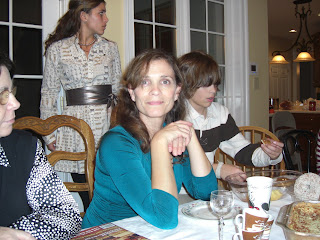 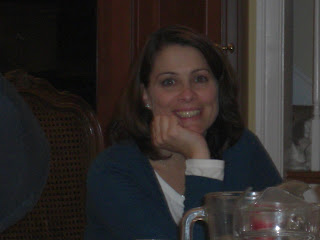 Tanya and her Uncle Anthony. And then again after a couple lemoncellos.... 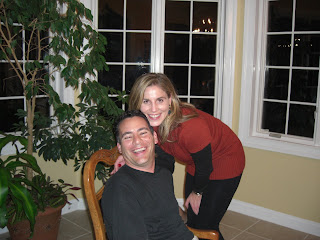 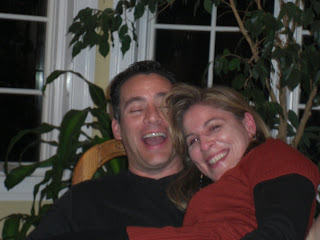 Yes, she was blowing kisses. On the right is her other Uncle, Chris. 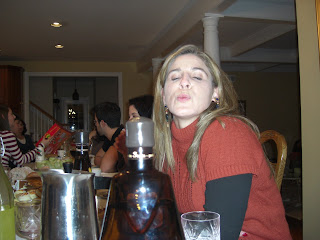 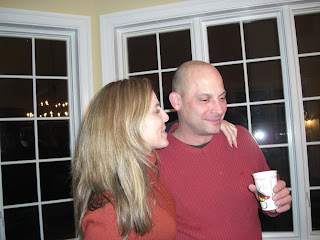 Though not alcohol induced, I was getting pretty tired. That's what eating your bodyweight in awesome food will do to you! 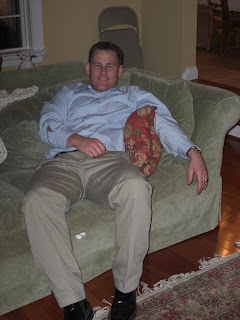 What a great Thanksgiving! I can't wait until the next one - probably Christmas.

Sometimes this cat does some funny stuff. Weird, but funny.
I wouldn't have thought the bathroom sink was comfortable, but apparently he did.
Hey - at least I didn't find him curled up in the toilet! 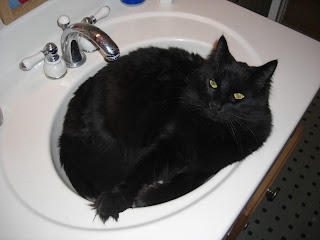 This picture was actually a while ago. Now, most cats could do this no problem. You know, most cats are good jumpers, graceful, good balance, etc. Not Renegade. He has all the grace of a drunk offensive lineman on ice-skates. How he managed to balance on the back of this chair I'll never know.... 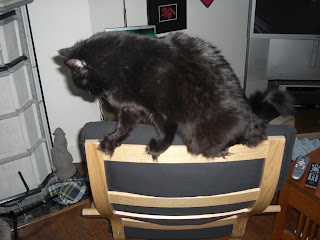 By the by...I hate the way this blogger formats what I'm typing in here. So, in the post below, when I say "bottom", "top" it's probably displayed on the left or right. I think you'll figure it out. You're all smart people.